Busy waiting, or spinning, refers to the situation where one thread's resources are utilized solely in checking for a particular condition to be through (in a while loop). Both compute time and power are wasted here since we do not actually require the processor to be running this check. In fact, spinning is more preferable to blocking primarily for performance reasons. A common blocking example is a pthread mutex lock; blocking, as in this example, refers to assigning the thread to some queue if it does not have access to the lock and then removing one of the threads from this queue as soon as lock is made available. The OS is involved in providing access to a particular thread and as a result, we have a strain on performance (which is not the case in spinning).

To get started, here is a simple, but incorrect implementation:

The following trace demonstrates the problem with this lock

The main problem occurs because of the interleaved execution of the threads. Both threads check whether the lock is free in an interleaved manner, and both "obtain" the lock.

The Test and Set instruction (ts) atomically loads the given memory address and sets the value at the memory address to be one. We can now write a test-and-set lock as follows: 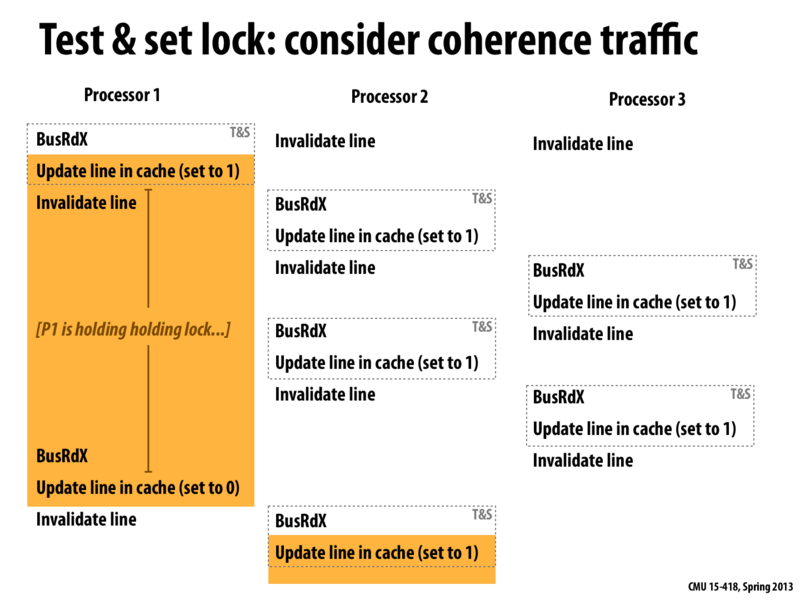 Now that we have a correct implementation, we can consider performance. The above diagram shows three processors all contending for the same lock. The Y-axis is time. Each processor is performing a test and set lock. In this case, processor 1 gets access to the lock first. Now, all other processors invalidate their cache lines according to coherance protocol. Processors 2 and 3 will keep executing test and set to try and again access to the lock. Every time processor 2 or 3 executes test and set, it askes for exclusive access to the memory address, grabs that cache line (which forces everyone else to drop it), writes a 1, and reads that another processor already has the lock. This processes repeats over and over again, until the first processor gives up the lock.

Test and Test and Set Lock

In the Test and Test and Set Lock, we test the lock just by reading the memory until it becomes free. Then we attempt to take the lock by executing test and set. The Test and Test and Set lock is an improvement on the Test and Set lock because reading from memory ("while (*lock != 0)") does not require exclusive access on the cache. Thus there is almost no bus contention when the lock is taken. We only have bus contention when the lock becomes free. When this occurs, some number of threads will attempt to execute a test and set instruction and one will get it.

The following diagram describes the bus contention for a Test and Test and Set Lock: 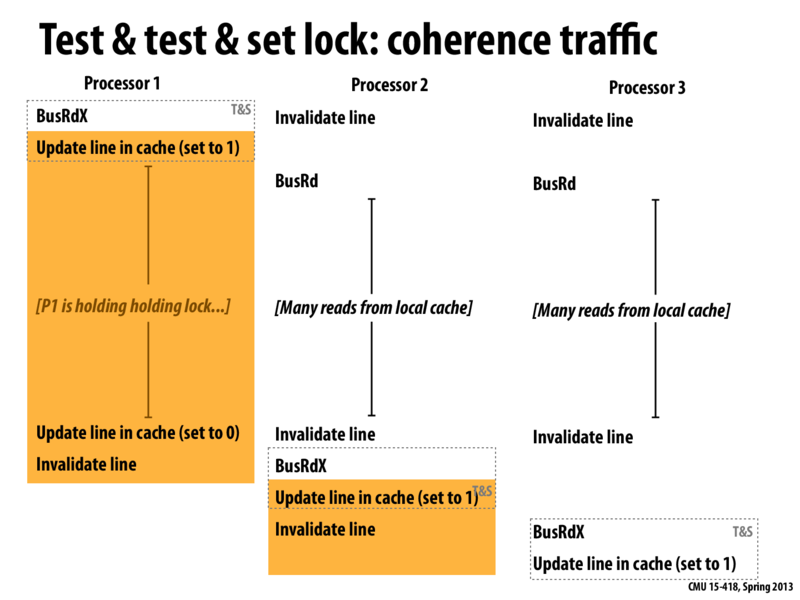 We begin with Processor 1 aquiring the lock. P1 issues a BusRdX to gain exclusive access to the lock, runs a test and set instruction, and aquires the lock. Then P2 and P3 attempt to aquire the lock. They both execute BusRd as they are stuck in the

line of the lock. When the lock becomes free, both P1 and P2 will have the line in their cache invalidated (since P1 writes to the lock), then they will both issue BusRdX to execute the test and set instruction.

They key here is that reading the lock reads from the processor's local cache This results in much lower bus contention than the simple test and set lock.

Characteristics of the Test and Test and Set Lock