A barrier is a method to implement synchronization. Synchronization ensures that concurrently executing threads or processes do not execute specific portions of the program at the same time. When a barrier is inserted at a specific point in a program for a group of threads [processes], any thread [process] must stop at this point and cannot proceed until all other threads [processes] reach this barrier.

Once we know no processors are in a previous barrier, we can set the flag. Then we increment arrive_counter since we have arrived in the new barrier.

In the aforementioned centralized barrier, there are two places in the code where the processors potentially have to busy-wait for other threads in the barrier. The following centralized barrier implementation incorporates sense reversal, an optimization which incorporates a local variable to each processor which allows the terminal state of one exit from the barrier to act as the initial state for a subsequent entry. 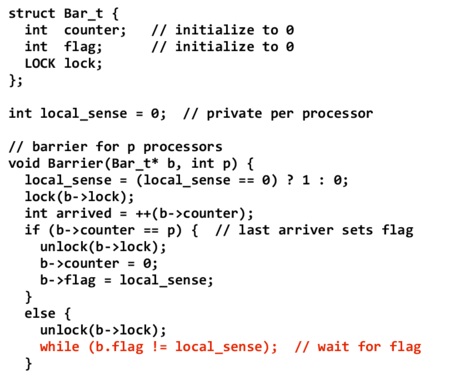 There are a number of differences between this and the previous implementation. First, note that the barrier structure has a single counter, as opposed to an arrive counter and a leave counter. Also, a local_sense variable is introduced. This variable is private to each processor and is initialized to 0 (the initial value is irrelevant, but it is important that each processor has the same initial value for the variable). local_sense is used in the barrier function to check whether all of the processors have arrived at the barrier, and can only take one of two values (0 or 1).

Sense reversal is correct and does not deadlock in the case of even and odd numbered barriers (e.g. some processors enter a second barrier while others are still leaving the first one), because the exit condition (b.flag != local_sense) for two consecutive barriers will be different (0 in one, and 1 in the other).

Thus, this optimization reduced the number of processors spinning, and reduces the number of accesses to the shared barrier variable.

One problem with a centralized barrier is that there is high contention for the barrier. This is illustrated in the following figure (left):

We see that in this case, contention causes O(P) latency where, P is the number of processes. One way to remedy this problem is to use Combining Trees (right), which better exploit parallelism in interconnect topologies. When a process arrives at a barrier, it performs an atomicIncr() operation on it's parent's counter until the process recurses to the root. In order to release, each parent, beginning from the root, will notify it's children. The latency in this case is O(lg(P)).